The Diorama That Led to Despair

I have been waiting for years to get to make another diorama. As a kid, there was nothing cooler than building a little scene in a shoebox. Perhaps I would have become a Rhode Scholar if I could have continued building dioramas in high school and college, but when they were replaced by projects involving diagrams and essays a little part of me died and I have been mourning the Death of the Diorama and my enthusiasm for learning ever since.

After many excruciating years of waiting, Big Pants finally got to make his first diorama!

I was ecstatic. It was all I could do to let him do it on his own.  I secretly considering pushing him out of the way and taking over, but I had to be a Good Mom and let him do it, even if he wasn't doing it my way.

But he did a fine job! We talked about possible scenarios, and although he did not take my advice, he was able to bring his vision to life using PlayMobile people and hot glue.  It stayed at school for about a million years, and he finally brought it back home. (I was really worried that "our" diorama would wind up at Daddy's house. That sucker was mine-all-mine, and I was going to keep it forever.) 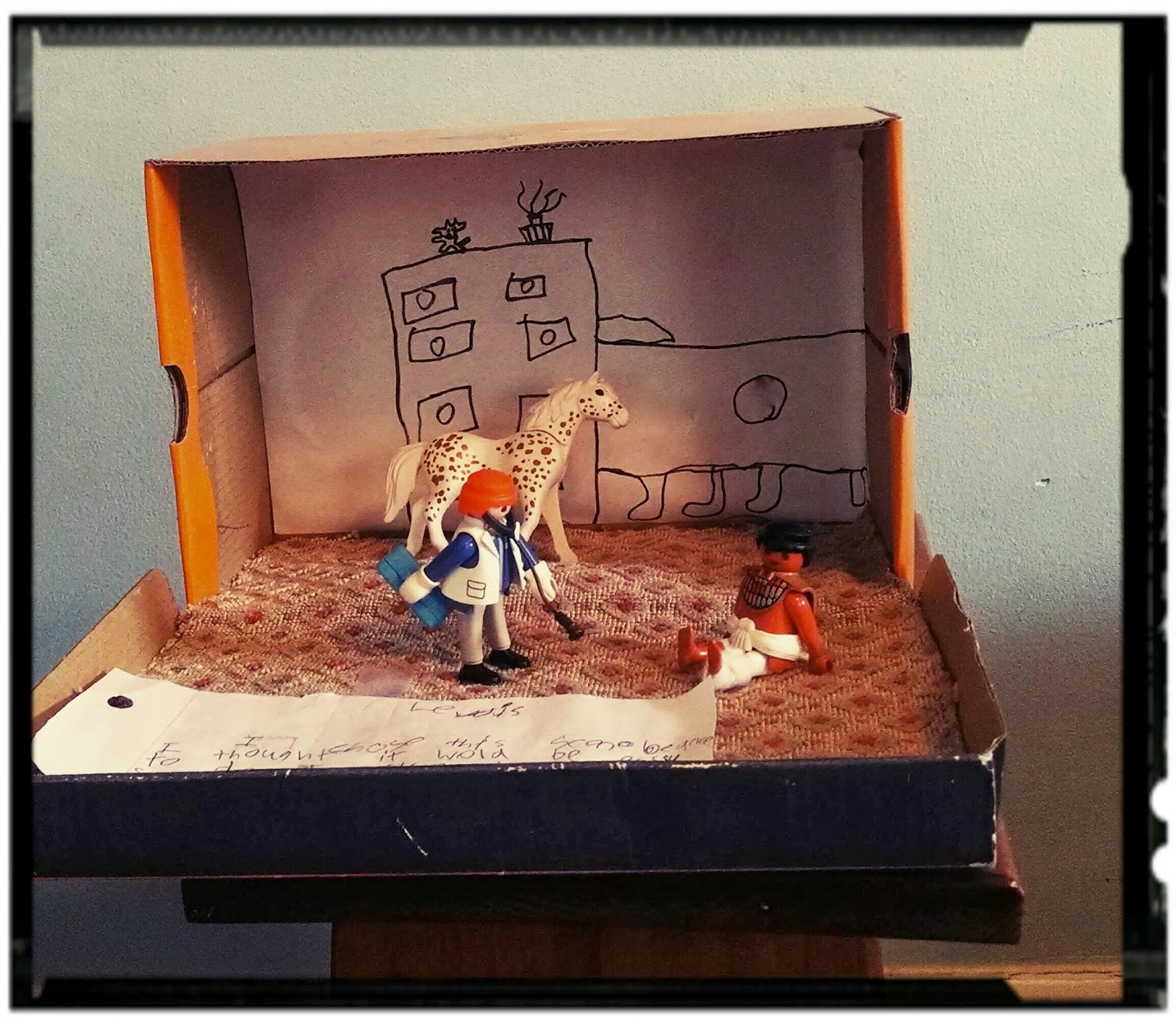 I opened the box to admire it, and for the first time read the "paragraph" he had written.  I admit I may have fallen down on this part of the job. I had helped him find all the pieces and even found a bit of fabric that could pass as carpeting.  I carefully supervised the hot glue.

When he said he had to write a paragraph, though, I never bothered to look at what he had written.  I mean, who cares about all that writing anyway? It's not like I'm a writer or someone who thinks words matter.

This is what my little darling wrote:

I chose this scene because I thought it would be easy to do. I also had a doctor, someone who looked like Little Bear and a horse.

Ahhh, the shameless honesty of my lazy child!  And the lazy mother who sent it to school for everyone to see!  Well, what can I say. It runs in the family, I guess. And at least the teacher knows I didn't do it for him or hover over his shoulder too much.

I'm going to make my own diorama of someone who may or may not resemble myself proof-reading their kid's homework -- with hot glue, Play Mobile people, and a bit of fabric to look like carpeting.