I Want to be More Outrageous

I have two boys. One who no one has ever picked on, and one who occasionally gets some flack.  At first, I thought that the youngest had a target painted on his forehead and that I had passed on some defective victim-gene.  Then I had a blinding-flash-of-the-obvious (prompted, of course, by someone older and wiser spelling it out for me).

My oldest son doesn't stand out. He is right in the middle of the group at school. He takes no great social risks. He likes everyone, and everyone likes him. He is fairly tapioca. I don't think he holds anything back; I'm not implying that he is striving to fit in.  He just fits in because he doesn't stand out.

My youngest, by contrast, is funny. He is quick to raise his hand in class,  always has a joke, and  isn't afraid to be a little outrageous. That makes him visible. That makes him fabulous, and that makes people notice him negatively as well.  But that doesn't mean he is doing it wrong. That means he is doing it right.

I understand this from both points of view. I spent many, many years trying to be Just Like Everyone Else. I tried to squelch my uniqueness in an effort to never stand out.  Eventually I realized that being Just Like Everyone Else was destroying everything that made me interesting, funny, and beautiful. It didn't work for me.

Being a little crazy is better than being a little boring, even if it is not as safe. Being outrageous makes you memorable, but also gives you technicolor memories of your own.  Yes, you might get some stupid people that say stupid things, but by far, people will like you. Fun people get more party invites.

Last year I went to a bar on Halloween in my "safe" not-a-costume-costume consisting of a Wonder Woman t-shirt and jeans.  No one else was dressed up at the bar, and I was grateful that I chose to be conservative and less-fun than I had originally intended. I was glad I played it safe so I didn't stand out.  I don't recall having any large amounts of fun. I don't even remember where I went. 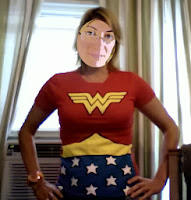 Let me say that again slowly so you can appreciate the absolute patheticness  of it:

I went to a bar on Halloween. Without Children. With my best friend. And it was only moderately fun. And I don't even remember what bar we went to, only that it was filled with  other people who were playing it safe as well.

Going to a bar on Halloween should be the funnest thing ever.  I blame my conservative not-a-costume-costume.  This year, I am taking a page from Tiny Pant's book.  I am wearing this everywhere I go: 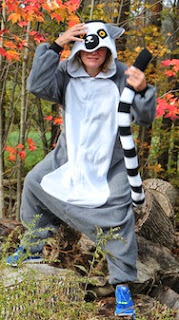 People might think I am a little crazy, but I bet I will have some memorable conversations. I bet I will be able to have at least one stand-out memory from the day.

(and I know you are jealous right now of my fabulousity. But it's ok, you can be your own kind of fabulous, too. Ebay. That's all I can say: ebay, baby.)