I haven’t been posting here that much lately, mainly because I am not all that funny, and as the kids get older, they stubbornly refuse to provide me with free material. But every now and then, they still give me something worth sharing.

Tiny Pants is making his Christmas list, because all he wants to do is shop and he’s making me crazy, so I told him to write Santa and stop bothering me. (I’m good at parenting like that.)

On his list there are a bunch of regular toy-type items that one would expect. But then we came to the One Thing He Wants Most of All.

Tiny Pants:  Mama, can we get a live rabbit?

Tiny Pants: What do you call an animal that died and they stuff them?

Tiny Pants: Yeah, that’s it. That’s what I want most of all. A taxidermied rabbit. Can I google them?

(I was sitting next to him to make sure he didn't get anything to gruesome, for the record.)

Tiny then copied and pasted an image into his Christmas list, but he isn't exactly a pro at resizing, so the image is now stretched and flattened in a most unappealing way.

I’ll have to let you know what Santa says when we visit him on Saturday. 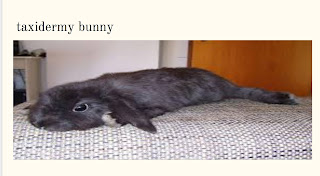 Footnote: At his age I did have a taxidermied squirrel I slept with every night, until I unwisely left it in my church school classroom and the janitor threw it away. I have to admit he comes by his weirdness honestly.

P.S. Bonus points go to anyone who can explain why taxidermied is not a real word.