Sometimes kids are handy to have around.

I don't mean because they fill your heart with joy or keep you young, or teach you patience. Sometimes they are down right useful.

Now, for normal bath operation, this wouldn't be a problem, because you don't need the tub to stay full for more than a few hours, but by midnight it appeared I might need the water to stay in the tub for a few days, as  my street looked like this:

I had my very own water feature! And I had my own private beach right in front of my porch! I knew if I waited long enough I would get beach front property.

But meanwhile, I had a leaky tub full of water, and I suspected that all the water in the street was going to cause an absence of fresh water for drinking, bathing, and flushing, so I asked a friend for some advice about the tub:

FRIEND:  Put some saran wrap under the stopper.

ME: OK, now the stopper is floating around. Maybe I should put a big rock on it?

FRIEND: You have a big rock laying around?

ME: Of course I have a big rock laying around! I have boys!

I went downstairs and chose one of the three large rocks from the collecting basket I keep in the center of the dining room table, which the boys fill with whatever nature-y things they lug home. It is always good for an assortment of rocks. 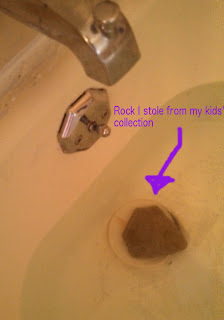 Later, I wanted to see just how deep the sink hole was, because I am the kind of person who likes to poke large sink holes with sticks to see how far down they go. I can't help it, it's my nature. I opened the coat closet and found the stick that I knew the boys had stashed there. It was the perfect length and diameter for poking things, because I have raised them right and taught them the art of poking things with sticks.  The hole was over a foot deep when I went to bed, and very fun to poke with a stick.

Around 5:00am a truck showed up and started tearing apart my street, and those sweet boys slept through it, though I have no idea how. When the boys woke up, I provided them with the free entertainment of men digging up the street, which is awesome.  The boys came in handy one last time, in gaining access to the big hole.  City workers are always super nice to curious boys and their mothers, and let us go very close to the hole and showed us all about what they were doing.  Alone, I would have been too shy to ask.